Sitting up there in the darkness with the wind, the night sounds of buffalo and the distant lights of cars, motorcycles and far off towns, he started to fear that a mountain lion was stalking him. There was no real basis for this fear except for a sudden and complete state of alarm inside his mind and body. There was no finding the trail in the dark and the drop would be steep if his sense of direction was off, besides on the hill you commit to die before coming down prematurely. This is where Crazy Horse suffered for his vision, white boy, show some respect. At the moment of his despair, in a rising wind with lightning approaching, he stood and felt the flapping of large wings around his head. He sat back down now scared, humble, reverent and sick with the notion that they want to build another biker bar less than a quarter mile from here. 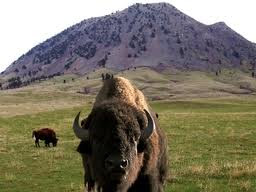